Will All Elite Wrestling “Bask in the glory” of Keith Lee? 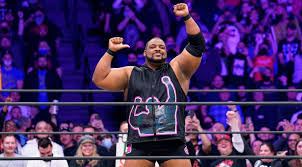 All Elite Wrestling {AEW} has become a popular destination for many professional wrestlers since its inception on January 1, 2019. They have developed their own “homegrown” talent with names like “Hangman” Adam Page, Jungle Boy, Brit Baker, and partnered them with veterans of the business-like Dustin Rhodes, Chris Jericho, Diamond Dallas Page, Dean Malenko, and more to become what many think is the most popular wrestling product on television. With other promotions around the world releasing talent, AEW owner Tony Khan has made some great additions to AEW as of late that keep fans weekly guessing who will show up on Wednesday Night Dynamite or Friday Night Rampage. This past Wednesday night Khan would land another great talent.

This past Wednesday night owner Tony Khan had AEW fans on the edge of their seats to see who would debut. He had set up a major wrestling moment with an opportunity to be in a ladder match for the next Pay Per View ‘Revolution’. Isiah Kassidy was in the ring and ready to go. The crowd was on pins and needles then the music hit. The words across the JumboTron said ‘Limitless’ and the stadium erupted. Keith Lee was now All Elite! The 37-year-old would go on to not only defeat Cassidy but earn the first slot in the upcoming PPV. Lee looked to be in great shape. His entrance got a good pop from the crowd. They chanted “oh bask in his glory” amongst other things during the match to show their appreciation for Lee. We also saw the debut of Jay White to AEW this week as he came in to help Adam Cole and the young buck. White will be making his debut this Wednesday against Trent Beretta on Dynamite.

All Elite Wrestling has made a name for themselves by having edgier content, matches, promos, and more and I am interested to see how they use Lee in these. Lee would debut with AEW in just a week following the completion of his ’90 day No Compete’ clause for WWE. I expect to see more wrestlers make their debut for AEW in the coming weeks.