What Cody Rhodes Returning to WWE Means for Pro Wrestling 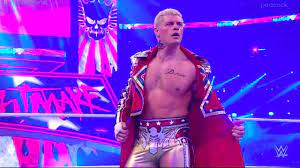 Cody Rhodes made his return to World Wrestling Entertainment {WWE} tonight in Arlington, Texas at WrestleMania. Yes, the Cody Rhodes who was recently with All Elite Wrestling. Why would Cody go back to a company he openly took shots at while at AEW? What does this move mean for professional wrestling and its future?

When Cody left the WWE in 2016, his exit would start what many have considered the modern-day ‘Monday Night Wars’. On January 2nd, 2019, All Elite Wrestling would be founded. Just a short 6 days later, on the 8th, Owner Tony Khan, along with Cody Rhodes, Kenny Omega, Nick and Matt Jackson, and Chris Jericho would introduce the world to the new wrestling promotion. Rhodes would go on to assume the Executive Vice President role in the company as well as on-screen talent. Rhodes signed a 3 million dollar a year deal with AEW.

As a talent, Rhodes would make the most of every opportunity to take shots at his former employer. From using a sledgehammer to destroy a throne identical to that of WWE CEO and former talent HHH, kissing golden shovels, to verbally berating them in countless promos Rhodes made it clear that he wasn’t happy in WWE. Cody would have many incredible matches and moments and hold championships in his time with AEW.

Why would Cody take all those shots at WWE then return just 6 years after leaving the company? While at AEW Rhodes would become frustrated with the production of the shows and with his roles in the company. This would lead to his contract expiring and he became a free agent. Rumors would begin to swirl about where Rhodes ended up next. When it comes to WWE owner Vince McMahon if he wants the talent bad enough, he will typically sign them. In Rhodes’s case, this was a road he had traveled prior and was familiar with how Vince operated. There are rumors of a very large contract with WWE but with the return happening tonight, nothing has been confirmed. Rhodes may have to take some internal heat from the locker room for his past comments and actions. With Rhodes getting the win tonight over Rollins it could be very interesting to see how he is booked with the company.

When you look at the recent transactions of Adam Cole, William Regal, and most recently Toni Storm in All Elite Wrestling it is rather obvious that they are a direct competition of World Wrestling Entertainment. These are all moves from WWE to AEW, but Rhodes is the first we have seen do it in reverse order. This move will be gloated by all of WWE and its fans as a win in the war as it should be. In the world of professional wrestling, this is a massive move. With the roster seemingly growing daily could we see more wrestlers follow Rhodes? I think we very well could see more, and I like what the future holds.  It is good for there to be multiple promotions excelling in their ratings and popularity.

The Rhodes family has been involved in some of the most unforgettable storylines in professional wrestling. Tonight, Cody cemented his legacy as the next in the line of the lineage to create his moment! This storyline has been one that wrestling fans around the world will talk about for years.