by Will Bass2 months ago4 min read 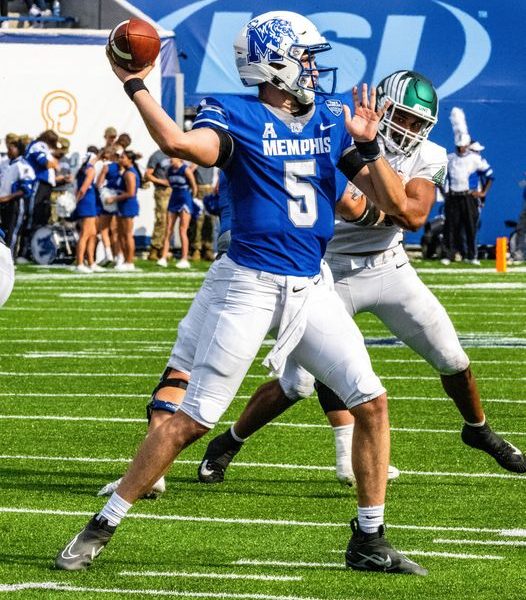 I couldn’t think of a better start to a Midsouth Saturday afternoon. The Memphis Tigers, at home, with an opportunity to handle business and go to 3 – 1 on their young season.

Memphis would start the day with the ball, getting off to a bit of a slow start, turning over on downs on their first game drive in their own territory. Not what Tiger fans were hoping for with the first offensive opportunity.

North Texas would retain the ball on Memphis’ 33-yard line to start their first possession of the game, which in most cases would lead to a 7-point swing, but the Tigers “D” flexed some muscle early, forcing the first points of the game and a Mean Green field goal.

The Defense of the Tigers would play a pivotal role as the game wore on, despite giving up nearly 500 yards to the big play-producing North Texas offense and QB Austin Aune.

The game started out kind of “cold,” looking a bit like a defensive/special teams struggle, but gradually warmed on the offensive side of the ball, as both teams would see multiple opportunities on offense. Neither team was very successful on 3rd down. However, both groups converted only 5 of their 27 attempts collectively. Each team would score four touchdowns a piece, the difference would be the points provided by the Tiger defense when all was said and done.

Memphis took a slight advantage in the time of possession category, but Aune and the North Texas offense won the total yardage battle, as Aune would go for 371 yards passing on 27 of 49 passing & 3 touchdowns. Aune would also tally two interceptions, resulting in “Pick 6’s”, awarding the Tigers their first 14 points in the second half.

North Texas would take the opening kick to start the 3rd quarter, but the Memphis defense stole the show in the second half. Mean Green quarterback, Aune, would be intercepted on the 3rd play of the 3rd quarter by DE Jaylon Allen, who returned the errant pass for 6 points.

The Tiger offense stalled against a persistent North Texas defense, going three and out on their 3rd quarter drives. Lucky for Memphis, pressure applied to the North Texas offense by the Tigers’ “D” would result in 14 total points. Two pick-6s, the first by Jaylon Allen in the 3rd and the second by “Zay” Cullens to begin the 4th quarter, would be eight years in the making, as 2014 was the last time the Tigers defense produced two pick-6’s in a single game.

Aune and North Texas continued to move the ball throughout the second half, but Memphis maintained their distance and a decent cushion until the final whistle. The Tigers ultimately win the day by a 10-point margin, 44 -34, over the Mean Green.

Memphis QB Seth Henigan had a respectable afternoon, completing 19 of his 29 passes for 141 yards, two touchdowns, and a single interception.

Offensively, North Texas put up 140 more total yards than the Tigers, but Memphis had nearly double that of North Texas on the ground. Brandon Thomas, the lead back for the Tigers, carried the ball 18 times for 84 yards and two touchdowns.

The Tigers move to 3 – 1 on the year and will spend the week preparing for an 11:00 AM kick-off against the Temple Owls on October 1st, as they continue their 4-game home stand.