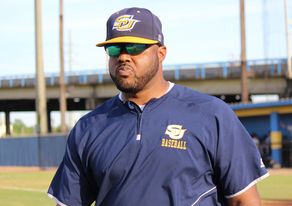 Memphis Head Coach Darron Schoenrock has retired as head coach and there is a new face for Memphis Tiger Baseball that man is none other than Kerrick Jackson. This hire comes one day after the Tigers’ season ended to UCF in the American Conference Championship Tournament with a 15-2 loss against the Knights. Jackson has a good background in the college baseball community. Jackson started his playing career at St. Louis Community College in St. Louis, Missouri from 1994-to 1995, transferred to historic HBCU Bethune–Cookman for the 1996 season, and ended his playing career with the University of Nebraska.

Jackson’s best season at the helm came in the 2019 campaign as Southern University finished the season 32-25 with a birth in the NCAA Tournament being eliminated by a strong University of Miami team in a 12-2 loss of the Starkville Regional. Since his resignation as Head Coach at Southern in November of 2020 Jackson has served as the President of the MLB Draft League a development summer league for college MLB Draft prospects.

We here at 4 Star Sports Media wish Coach Jackson the best of luck as he takes over the ranks as head coach for the University of Memphis and welcomes his wife Talia, and two sons Zion and Lazarus.