Memphis is Back in The Big Dance! Who Will They Play? 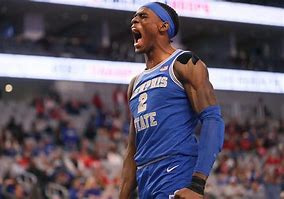 For the first time since 2013-2014, the Memphis Tigers are back in the NCAA Tournament. On Sunday, Tiger fans found out the #9 seeded Tigers {21-10} would face #8 Boise State {27-7} on Thursday at 12:45 on TNT. These two battled last season in the NIT tournament en route to a Memphis Championship after the tournament. Who will win between two of the hottest teams coming into this tournament?

Tortoise and the Hair

This game will feature two teams who have contrasting styles. Memphis comes into the tournament as the 34th ranked the fastest pace of play while Boise comes in a 330th nationally. The Tigers will need to keep this pace up to try and attempt to speed up a snail passed Boise, team. This will be a huge factor in this game Thursday night. What other factors will play into the game?

Freshman Jalen Duren has become a force for the Memphis Tigers by leading them in points per game {11.9}, and rebounds per game {7.5} coming into this tournament. His length, wingspan, and athleticism will give Boise State fits for 40 minutes if they let him take over. Duran will need to play the way he has down the stretch of the regular season for Memphis to come away with a first-round win. Memphis ranks 5th nationally in offensive rebounds and keeping possession will be a key factor in the game. Boise State is ranked 5th in the nation in defensive rebounds. Duren is the type of player that can lead a team deep in this tournament. He is a force that Memphis fans haven’t seen since Joey Dorsey in the historic 2008 national championship run.

Memphis commit a turnover on 23% of their possessions so far this season and are averaging 16 per game which is 140th nationally. This will need to improve for Memphis to make a deep run in this tournament. The Tigers will have to limit theirs and increase the Boise States 16th ranked 12 turnovers and capitalize on them. Guards, Alex Lomax, and Tyler Harris will need to keep possession and score points to get this win.

How are these teams on neutral Courts?

Memphis is 3-2 this season on neutral courts.

Boise State is 6-1 this season on neutral courts.

These are just three keys to victory for the Memphis Tigers. This is the NCAA Tournament and madness can happen! For Head Coach, Penny Hardaway, and this team, being in the tournament is a huge step in the right direction for the program. Now that the Tigers are there why not make some noise!