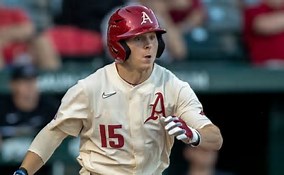 The 2nd ranked Arkansas Razorback’s baseball team hosted the UCA Bears on Tuesday night in the first of two games they are set to play this year. This in-state matchup featured a lot of runs and some exciting moments. The Bears got the scoring started putting up three runs in the first inning against starting pitcher Miller Pleimann who was pulled out of the game during the inning. Arkansas would get an unearned run in the bottom of the first but that was all they could muster. Down 3-1 in the bottom of the 2nd inning, the Razorbacks tied the game on a two run triple down the first base line by Sophomore Dylan Leach. The hit would be the first of many on the night for Leach. Arkansas would then take a 4-3 lead after a single by Cayden Wallace scoring Leach and they would not trail again the rest of the game. The bats were on fire the entire night as Arkansas would score in every inning that they came up to bat.

Stealing the show was Sophomore Dylan leach who would have an absolute monster night going 5 for 5 and hitting for the cycle. Of his five hits, two were homeruns and they came from each side of the plate. Before last night, the most recent Razorback to hit for the cycle was Robert Moore last year, who also did it against UCA. Before that, a Razorback player hadn’t hit for the cycle since 1994. Arkansas would go on to win last night’s matchup 21-9 on 19 hits to 13 hits for the Bears. Of their 19 hits, 7 of them were homeruns. The first long ball of the night was hit by Brayden Webb which was a grand slam, two were from Jace Bohrofen and one was hit by Peyton Stovall and Jalen Battles. The other two homeruns were off the bat of Dylan Leach. With the win, Arkansas improved to 22-5 overall while UCA fell to 11-16 overall. The next meeting between these two teams will be on April 26th at Dickey Stephens Park in North Little Rock. Arkansas will now travel to Gainesville to start a three-game series with the 19-10 overall Florida Gators who were just swept by Georgia. Arkansas is 7-2 in SEC play while Florida is sitting at 3-6. Game 1 will be on Thursday at 5pm on SEC Network.