Have We Forgotten About The Greatest Rivalry In College Football 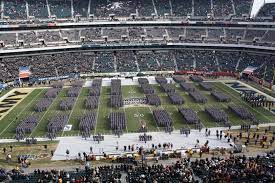 The world of College Football is literally in a frenzy right now. Fans are scanning Twitter by the second to see the latest news. Coaches and players are in the transfer portal. College Football Playoffs have people in an uproar. Heisman Trophy announcement has people in Alabama steaming mad. The entire nation has forgotten about the greatest rivalry in the USA. A rivalry that is about more than football. It’s about our freedom as Americans. This Saturday Army and Navy play in a tradition-filled football game that many fans may have forgotten about.

Army and Navy have met 121 times on the football field. The games as of recently have been close. These two teams give us as fans something unique to only this game. The only game all season that the players and student bodies in the stands are the sole reason we have the freedom to watch this great game we love. These young men are not at their respected schools to strictly play football. They are there to serve. Whom may you ask? They are serving the United States of America. Their education is completely different from any other University. This game has the history and traditions that being an American is all about.

Trickery, catching your opponent off guard, being sneaky and hazing all happen in rivalry games. The case of the Army and Navy is a little bit different. The Navy mascot is named “Bill”. He is a curly-haired Angora goat that can be seen in all Midshipmen games. For years the tradition was for Army cadets to travel to a farm in Maryland where “Bill” is kept. There is a field full of “Bill’s actually. In 1992 both schools signed an agreement to “ban kidnapping of cadets, midshipmen, and mascots”. This season the group from the Army went to the field to get “Bill”. This season’s game was #37. Well, when the cadets arrived, they were quite noisy and grabbed # 34. They grabbed the wrong goat. Navy has had other schools try and get their mascot. Air Force and Maryland have also made the trip to get “Bill”.

The Army and Navy game doesn’t have the traditional pregame or crowd. Both schools have their student bodies in the stands. It is how they get to the stands that is what is so breathtaking. For each school, each company and commander are announced then “March On” the field. This tradition is something that will leave goosebumps watching on Tv. As a fan of this amazing sport, I want to experience this in person in the future. The scene watching the field full of Cadets and Midshipmen is a sign of Unity to me. Two rivals that are opponents for the duration of the game yet partners in war and protection of this great country.

I mentioned that these two schools were partners. They have a tradition after each game that I find beautiful. “Honoring the Fallen” sounds sad and dark. It’s quite bright if we step back and look at it. The tradition is where the winning team will go across and sing the opponent’s fight song with them. This shows the respect that the schools gave to each other. The love for the goal. Not scoring touchdowns yet they are nice. It’s about life after football. These young men may never see members of the other team ever again in their lives. Yet after a grueling battle on the football, they can be brothers. They are one unit. For one cause.

Saturday when Army and Navy step on the field. It’s not about the records yet Army comes in at 8-3 and Navy 3-8. Once all the pregame festivities are over and the ball is kicked off these two teams will battle. They will make amazing plays. They will give it they’re all. The difference in this game is they continue to do that after the final whistle. They give their all for their family names. They give their all for every American watching at home. The ones who don’t watch the sport at all. They give us something we all forget about. Freedom. Freedom can never be forgotten.