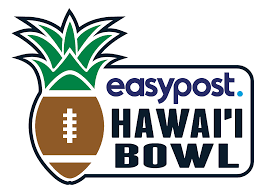 The Memphis Football Program is now in its 8th consecutive season of making a bowl game. This season they are on the island of Hawaii to take on the hometown Rainbow Warriors for a Christmas Eve matchup. This will be the first time for these teams to meet on the field. This game is much more intriguing than some may think. Both teams have a lot to play for to keep the momentum into the off-season.

Who are the Hawaii Rainbow Warriors?

Hawaii will appear in its 4th consecutive Bowl Game and now it’s the 10th Hawaii Bowl of all time. Led by Head Coach Todd Graham the rainbow warriors come into this bowl game with a 6-7 record and a bit of luck. They were able to play in this game because of an extra bowl game added in Texas. With wins over two top 25 teams in Wyoming and Fresno State for the warriors, this game will be no cakewalk for the Tigers.

Rainbows Offense
The Rainbow Warriors will be without some of its star players from this season. Chaven Cordeiro has thrown for 2793 yards, 17 touchdowns, and 11 interceptions this season but entered the transfer portal. Running Back and team-leading rusher Dae Dae Hunter also entered the portal before the game. Backup Brayden Shager is expected to start at quarterback and Dedrick Parson will start at Running Back for the bowl game. Swiss Army Knife Calvin Turner Jr will be utilized in many ways and can be a handful for defenses. The Warriors average 28.8 points per game. Offensively they average 262.2 through the air and 142.8 on the ground for 36th and 86th rank nationally in these categories.

Rainbows Defense
Defensively the Rainbows have struggled this season. They come in ranked 111th in total defense and 126th In pass defense. They have found one extremely bright spot this season. Turnovers! They rank 4th in the nation in creating turnovers with 27 on the season. They have recovered 13 fumbles and have intercepted the Quarterback 14 times. The Rainbow Warriors will be looking to create more on Thursday.

Who are the Memphis Tigers?

Second-year Head Coach Ryan Silverfield and the Memphis Tigers enter the Hawaii bowl with a 6-6 record. This season had its ups and downs as the Tigers clawed their way to another bowl. Star Wide Receiver Calvin Austin III who has been injured for the latter part of the season opted out to prepare for the Draft. The Tigers also lost Defensive Coordinator Mike Macintyre who took the Head Coach job at Florida International University.

Freshman Signal Caller Seth Henigan has grown up before Tiger fans’ eyes this season. He comes into his first bowl game having thrown for 3322 yards for 28 TDs and 8 interceptions. He has taken his bumps and bruises as he has learned along the way. He has had help in the backfield with a multitude of players who can take the pressure off him. Running backs Brandon Thomas, Rodriguez Clark, Marqavious Weaver, and more have attacked the ground by committee all season. The Tigers have rushed for 1645 yards on the season for 18 Tds. Memphis has weapons all over the field. I mentioned Calvin Austin III earlier in this article and the Tigers will miss his 74 catches for 1149 yards in this game. When it comes to weapons Memphis has plenty to take up in his absence. Senior TE Sean Dykes, Sophomore Javon Ivory, Breakout Junior WR Eddie Lewis to name a few will be itching to light this Warrior defense up. The Tigers will need to limit something that has been its Achilles heel and that is turnovers in this game.

Under 2nd Year Coordinator, Memphis had its struggles early in the season. Offenses were torching them for yards and points week after week. It was almost a mirror image of last season as the Navy game was the turning point. The Tigers locked down and did two things they couldn’t do. Tackle and create turnovers. The Tigers D will need to continue this to slow this Warrior offense down. This Memphis Defense has 11 turnovers in their last four games coming into this bowl. Senior LineBacker JJ Russell leads the defense in tackles with 123 total {78 solos, 45 Assisted} and will be key for them Thursday. In the Secondary it will be Senior Defensive Back Rodney Owens will look to improve his team’s high 2 interceptions. His play as of late in the season has been a spark that this defense needed. He along with Junior Quindell Johnson has made this Tigers secondary a threat. In the trenches is where Memphis will have to win the battle. Seniors John Tate and Morris Joseph have been on a tear and look to wreak havoc on the Warriors O-Line. Memphis will have to tackle well and create extra possessions for its offense Thursday to close out Hawaii.

How I see it playing out.

Christmas Eve is always a time to be with friends and family. What better way to spend this time than with a Memphis Bowl Victory?
Memphis 38 Hawaii 17.