Could This Be A Outback Bowl Classic? 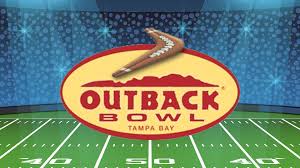 The 2022 Outback Bowl will feature the Penn State Nittany Lions and the #24 Arkansas Razorbacks from Raymond James Stadium in Tampa, Florida. This will be the first time in the long history of these two programs that they will compete on the gridiron. Arkansas comes into their first bowl game since 2016 with a record of 8-4. Penn State comes in at 7-4. This year’s New Years Day game may turn out to be one of the best of the bowl season.

Head Coach James Franklin has been named as a candidate for…We seem to hear this every season. Right? He also seems to win games every season. No matter where he is coaching. In 2019 the Nittany Lions finished 11-2 and beat a feisty Memphis team in the Cotton Bowl. Fans were excited for the next season under Franklin. 2020 was a season of unfortunate events from injuries to protocols for the Nittany Lions. They fought through the adversity and finished a shortened season 4-5. This season they have been much improved with a 7-5 record.

Offensively Penn State is most effective when they attack through the air. This season they have scored roughly 70% of their points with this scheme. Redshirt Senior Quarterback Shawn Clifford has made good on why he returned for this season by throwing for 2,912 yards, 20 touchdowns, and 6 interceptions. His weapon of choice in 2021 has been Wide Receiver, Jahan Dotson. Dotson comes into Tampa with 1,182 yards on 91 catches. He has hauled in an impressive 12 Tds on the season. The Nittany Lions have a duo of Running Backs in Keyvine Lee and Noah Cain. Lee has rushed for 495 yards and 2 touchdowns and Cain for 322 and 2. The offense will need to remain strong to start the new year off right.

James Franklin has been affected by the portal. Not just the player transfer portal but the coaching portal as well. His former Defensive Coordinator Brent Fry left for the Head Coaching position at Virginia Tech. Penn State was left with no one to lead its #4 scoring defense in the Big 10. After an embarrassing display of morals by Miami when it comes to Manny Diaz Penn State had found their man. While coach Diaz will not be coaching, he will get to watch an impressive defense in live-action. Senior Safety Ji’ayir Brown and Linebacker Ellis Brooks are the core of the defense. Brooks has 100 tackles on the season and Brown has 67 tackles and team-leading 4 interceptions. Averaging just 135 rushing and 208 passing per game this season is impressive when you look at the offenses they have faced this season. The Nittany Lions’ defense has been their backbone all season. The defense will need to play another great game for a Nittany Lions win.

When it comes to underdog stories is there a better one than 2nd year Head Coach Sam Pittman and the hogs? In 2019 the University of Arkansas would have paid for a win on the football field. The “Hammer Down Left Lane” era of then-coach Chad Morris ended before it ever got started. Arkansas went with Sam Pittman for their head coach. He knew the program from being an offensive line coach from 2013-2015. He knew what it takes to win in Fayetteville. He made two of the most important assistant coach hiring of any around the country. He brought in Barry Odom to run the defense and Kendall Briles for the offensive side. These two coaches have rejuvenated the razorback nation around the country. The Hogs come in believing they belong. Pittman is an even 11-11 In his two seasons at the helm.

Imagine you are playing jeopardy for a moment. The clue is in the college football topic. The clue is “Who is the most underrated quarterback in the SEC?” You hit the Buzzer! KJ Jefferson is the answer to the question. The Sophomore from Sardis, Mississippi has flourished in the Kendall Briles Offense. Jefferson has thrown for 2,578 yards, 21 touchdowns, and 3 interceptions. To add to that he is the team’s second-leading rusher with 554 and 5 Touchdowns. This offense will miss wide receiver Treylon Burks who had 67 catches for 1,123 yards for 11 touchdowns as he opted out before the game for the NFL. While he was the number one target through the air the hogs are ground-based. Trelon Smith comes in with 592 yards for 5 touchdowns entering the bowl. Offensive Coordinator, Kendall Briles’s offense is commonly thought of as an “air it out” style. The Hogs have been rather balanced averaging 223 yards passing and 217 rushing per game. The chess match between the hogs offense and the Nittany Lion defense will be fun to watch.

Barry Odom made an immediate impact on an Arkansas defense that was horrible when he got there. They couldn’t do the fundamentals. In the two years under him, the defense is playing with tenacity in a hardnosed and hard-hitting style. The defense is senior-led/ The Linebackers for Arkansas is next-level talent. Senior linebacker Bumper Pool has 120 tackles {41 solos, 79 assisted} on the season. Anyone who watched this team knows who the leader is. It is Pool. Don’t let that high number of tackles fool you. He is not alone on this defense. He has some fellow seniors who make plays as well. Hayden Henry accompanies pool in the middle level and has 94 tackles and leads the team with 3 sacks. This defense is great at all three levels. In the secondary Ashdown, Arkansas product Montaric Brown is wreaking havoc on quarterbacks with a team-leading 5 interceptions. He also has 53 tackles this season. This entire defense is facing an offense that likes to throw all over the field. Can the hogs stop it?

How will it play out?

In the end, I think KJ Jefferson and the Arkansas offense prove to be too powerful. The hogs score more than the 17 Penn State has averaged per game. Hog defense gets some turnovers.