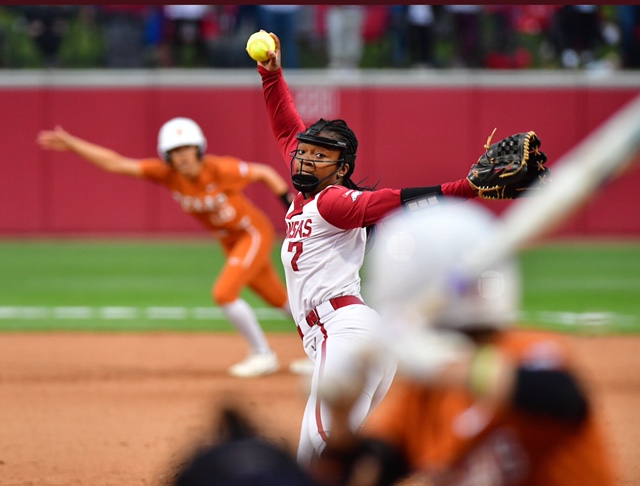 The #4 Arkansas Razorbacks softball team hosted the Texas Longhorns on Thursday night looking to win their first Super Regional game in program history and get within one win of clinching a spot in the College World Series for the first time in program history. Runs were hard to come by for both teams early on as Arkansas pitcher Chenise Delce and Texas pitcher Hailey Dolcini stole the show. Both pitchers were able to pitch out of jams and keep their team in the game while the bats were waiting to heat up.

Not surprisingly Arkansas was first to get the party started scoring three runs in the fifth inning. Beebe, Arkansas product Hannah Gammel got the first RBI of the game bringing home Hannah McEwen. With the bases loaded in the bottom of the fifth, the Razorbacks scored two more runs on a fielding error. Up 3-0, Arkansas would score four more runs in sixth inning. Hannah Gammel and Linnie Mallon each had an RBI, and the other two runs were scored on a throwing error. Texas was able to score a run in the seventh inning but that’s all they would get. Arkansas would take game one 7-1 and need one more win to earn a trip to Oklahoma City and play in their first ever College World Series. Game two will be on Friday at 5:30pm.