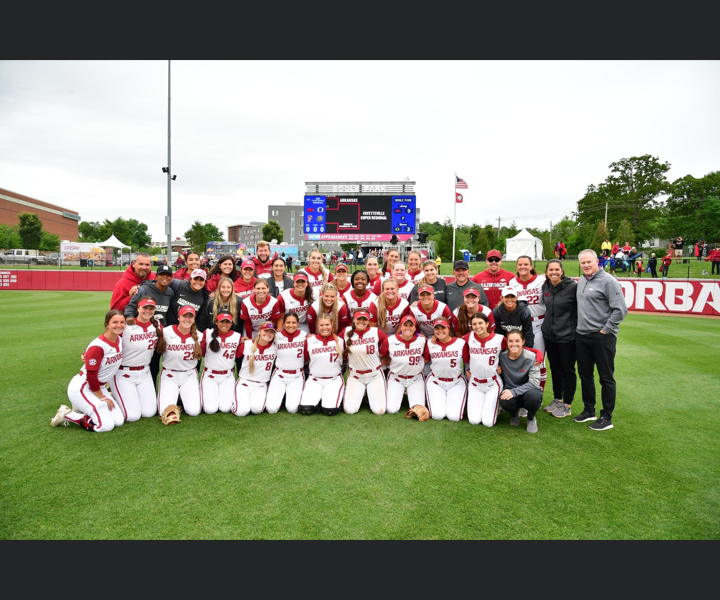 The #4 Arkansas Razorbacks softball team played their first game on Friday against Princeton and made quick work of the Tigers. Danielle Gibson contributed with a grand slam in the bottom of the fourth inning. The Razorbacks scored eight runs in the inning. Arkansas went on to win 11-0 in five innings.

On Saturday the Razorbacks would face #24 Oregon for a chance to advance to the regional finals. After a more than two-hour weather delay paused the game in the first inning,  a pitching duel ensued until the 6th inning where the Arkansas bats finally woke up. There was a brief pause in the game during the inning due to a squirrel running onto the field. Linnie Malkin got the scoring going with a three run home run. Freshman Kacie Hoffman would follow with a solo home run. The Razorbacks would add two more runs in the inning. Oregon would get on the board in the bottom of the seventh inning on a two run homerun. Arkansas would win 6-2 and advance to the regionals finals.

The Razorbacks and Ducks would meet again on Sunday. Oregon battled their way through the loser’s bracket defeating Wichita State 8-1 on Saturday after falling to the Razorbacks. On Sunday bats got going in the second inning thanks to Linnie Malkin and Kacie Hoffman who each homered. Danielle Gibson joined the party in the fourth inning with a hitting a home run of her own. Oregon would not go away quietly, scoring three runs in the bottom of the fourth to tie up the game. The Ducks scored all three runs on an infield single followed by several throwing errors that allowed all three runners to score. Arkansas would not respond until sixth inning, but they did so in a big way. The Razorbacks scored six runs in the inning and the biggest hit came off the bat of Rylin Hedgecock. With the bases loaded and Arkansas leading 4-3, Hedgecock doubled to right center scoring three runs and blowing the game open. Arkansas would go on to win the game 9-3 to advance to a Super Regional in which they will have the luxury of hosting in Fayetteville.

My takeaways:
This Arkansas team has all the tools to make it to the World Series and possibly win the whole thing. Here’s why. They have the back-to-back SEC Coach of the Year Courtney Deifel, SEC Player of the Year KB Sides and SEC Pitcher of the Year Chenise Delce. Pitcher Mary Haff has also been dominating in the circle this year. Arkansas’s pitching has been one of their strengths all season, along with their outstanding hitting.

Arkansas (47-9) will now face Texas (41-18-1)  starting Thursday in a best of three series for a chance to play in their first ever College World Series. Texas eliminated #13 Washington 3-2 on Sunday in the Seattle Regional final.

The Women’s Softball College World Series will be June 2nd-9/10 in Oklahoma City.