The Arkansas Hockey Club came into this weekend on a seven-game winning streak after winning all three games last weekend. The Hogs would welcome the Kansas Jayhawks to the Jones Center for a Friday and Saturday weekend slate. Arkansas would dominate the Jayhawks by outscoring them 25-0 in the weekend series. This club is playing some incredibly high-level hockey as of late. What has been the key to this play for the Razorbacks? What players have been standing out? Who is next for the Razorbacks? We will answer all these questions and more.

What has led to this run of wins?

The last time this team lost a game was on October 7th, when Missouri defeated Arkansas by a score of 4-1 at the Jones Center in the Friday night game of that weekend series. Since that game, the Hogs have outscored their opponents in Nebraska, North Texas, Miami {OH}, Ferris State, Davenport, and Kansas by a difference of 53-8.  Arkansas hasn’t given up a goal since the first game of the Route 66 Showcase when Miami of Ohio scored three goals in a 4-3 loss to the Hogs. In the most recent series, the Razorbacks held the Jayhawks under double-digit shots in the second game they won 15-0. The pressure has been turned up, and the Ice Hogs are starting to heat up.

Offensively the Razorbacks are ramping up their shots on goal as of the last few games. They have pushed their shots to 60 and more in games over the past weekends. They average roughly 48 per game on the season. This has given them more opportunities to score, and it is working. Arkansas scored against Kansas at will over the weekend. It looked easy to score at times. This team has been scoring at a prolific pace with players like Zach Wilson, Cameron McAtee, and others. Thus, the team has a potent and efficient offense to score with any team they face. To further this point, in the most recent game against Kansas, the Hogs scored nine goals in the first to close the game out entirely. This team can score on anyone they play, with multiple players that can strike any night.

Defensively, this team is physical and has stellar play in the net. Over the weekend, the Razorbacks allowed less than double-digit shots in the Saturday 15-0 assault of the Jayhawks. Players like Tyler Book, Zack Kilgore, and others have been putting extra pressure on opposing teams since that night in October. When you only allow eight shots in an entire game, it makes for an easy night for the defense and goaltender.

Speaking of goalies, the Razorbacks have a trio of talent. With starters Sam Haynes, Grady Reiss, and Noah Goodwin, this position is among the strongest on the team. Goodwin would win player of the game in their 15-0 win over Kansas. Haynes is undefeated on the season, and this team is a real threat in the MAHCA this season. In the current nine-game winning streak, this position has been vital, and don’t look for this to change as this season progresses.

Who has been Hot?

Senior Griffin Sugasawara comes to the Razorbacks from Coppell, Texas. The lefty played with the Dallas Stars Elite in addition to the Hogs. The 5th year senior has a communications major and has been assistant captain for the last two seasons. Sugasawara was named an ACHA 2nd Team All-American in 2020 and 2021, and his play in 2022 shows that he can be a 1st team following this season. On October 22nd, he scored his 100th ACHA goal and was named player of the game following the 7-0 win against Ferris State. That was also his 200th point. Since that game, Sugasawara scored three goals against Kansas, including two in the series’ final game. The team calls him “Sugar,” He will be a sweet treat to watch play the rest of the season.

Senior Michael Ellis comes to the Hogs via the Dallas Stars Elite and Frisco, Texas. The right-hander had 18 goals last season and is playing well this season. Ellis has scored five goals in this currently winning nine-game stretch and doesn’t look to slow down. Ellis is active on the ice and in front of the net for the Hogs. He has been an intricate part of the above-mentioned offensive assault by the Razorbacks. Ellis will look to continue this play as the Hogs move deeper into the season. Ellis is a 2022-23 Assistant Captain, and based on the play, he is playing his role perfectly.

There are many players on this team who are playing exceptionally well. Aransas has incredible ice chemistry this season, especially during this current streak. Let’s look at the schedule to see who the Hogs play next. Can they keep this winning streak intact?

Next for the Razorbacks, on November 5th and 6th, is Nebraska- Omaha in the Jones Canter for a Friday and Saturday series. Arkansas will look to keep their home ice advantage going as the recent crowds have been loud! The Friday night game will begin at 7:30 pm and feature the “Chuck The Puck” challenge, where you can win a free Whataburger for a year and an official Hogs Hockey Jersey. On Saturday, the puck will drop at 1:30 pm for game two of the series. 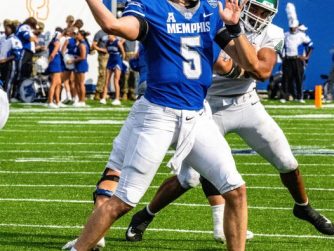