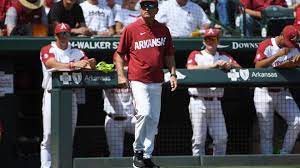 The struggling Arkansas Razorbacks baseball team looked to pick up a much-needed confidence-boosting win on Friday against the Florida Gators. Arkansas would find themselves down early once again, allowing the Gators to score two runs in the bottom of the second inning. There was no more scoring until the bottom fifth inning when Arkansas pitcher Connor Noland was tagged for two solo home runs. Noland would not finish the inning and lefty Evan Taylor entered the game in relief, allowing an unearned run. Trailing 5-0, the Arkansas bats finally came alive in the sixth inning courtesy of solo home runs by Cayden Wallace and Michael Turner. Florida was able to respond immediately adding two more runs in the bottom of the inning, halting any momentum the Razorbacks had. Arkansas made a last-ditch effort in the ninth, with Brayden Webb going deep for a two-run home run but it was not enough as Arkansas fell 7-5.

Arkansas will now wait and see what regional they will play in with some speculating they will make the trip to Austin, Texas.

My takeaway:
There hasn’t been much to be positive about lately if you are an Arkansas baseball fan. Although the hitting has been far from great, in my opinion, unreliable pitching continues to be Arkansas’s biggest weakness. Most know the potential this team has but it just hasn’t come together like we are accustomed to seeing from Dave Van Horn coached teams. Will Arkansas turn it on when it truly counts? We shall see. I think so.