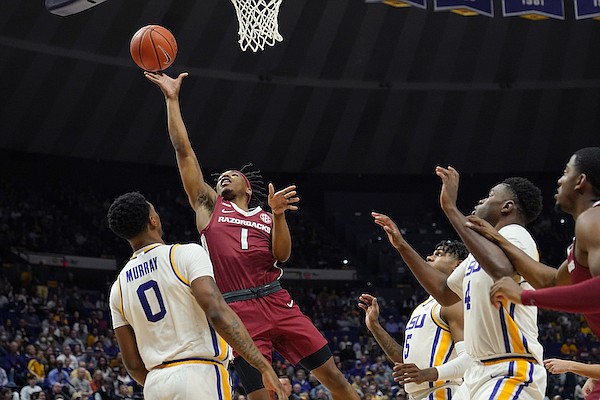 The Arkansas Razorbacks (12-5)(2-3)  entered Saturday’s game with the LSU Tigers (15-2)(3-2) with some momentum coming off of their 87-43 blowout win against Missouri on Wednesday night. From the opening tip off against LSU  on Saturday Arkansas went toe to toe with the tigers. Neither team shot the ball very well in the first half but that was largely in part of the tough defense that was being played by both teams. LSU lead 33-31 at the break and it felt like the hogs were going to be able to hang with the tigers until the end. The Razorbacks did just that, playing good defense and forcing the tigers to take tough shots. Arkansas trailed 56-48 with 9:04 left to go in the game. The Razorbacks then went on a 17-2 run to close out the game and leave Baton Rouge with a hard fought season shifting win lead by Assistant coach Keith Smart who filled in for head Coach Eric Musselman on Saturday while he was home recovering from rotator cuff surgery. Not surprisingly, JD Notae was the leading scorer for the Razorbacks with 19 points, Au’Diese Toney had 12 points and Jaylin Williams had 11 points to go with 13 rebounds. Assistant coach  Keith Smart will be filling in for Head coach Eric Musselman again for Tuesday’s game against South Carolina (10-6)(1-3) as the Gamecocks travel  to Fayetteville to play a much more confident and improved Arkansas basketball team. After an 0-3 star to conference play, Arkansas has now won two straight conference games and will look to make it three in a row on Tuesday night against South Carolina.