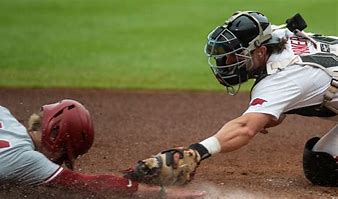 Arkansas and Alabama squared off on Wednesday in a rematch from their series the previous week in Tuscaloosa in which Alabama won two out of three games. Alabama still had a lot to play for heading into the matchup with the Razorbacks. The Crimson Tide won their first game of the tournament on Tuesday eliminating Georgia 5-3 and were looking to win their second game of the tournament against the Razorbacks and boost their chances and make a regional. Arkansas head coach Dave Van Horn was not available in the game due to an illness.

Alabama scored first thanks to some help from the Arkansas defense in the second inning. With the bases loaded and one out, Robert Moore’s throw got by first baseman Peyton Stovall on a tough double play attempt allowing two runs to score. Alabama would tack on another run in the third inning on a sacrifice fly down the third-base line that was deep enough for the runner to tag up and score. Down 3-0, Arkansas would finally get on the board thanks to a no-doubter homerun by Jalen Battles.

Alabama would get that run back in the top of the fourth inning on a throwing error by Arkansas catcher Michael Turner trying to pick off the runner at third. Arkansas scored two runs in the bottom of the sixth inning on a Chris Lanzilli two-run blast, but that’s all Arkansas would muster for the rest of the game falling to Alabama 4-3. Arkansas and Alabama will not know their next opponent until today sometime. With more rain in the forecast, there might not be any baseball today.