All Eyes Will Be on Memphis and Houston 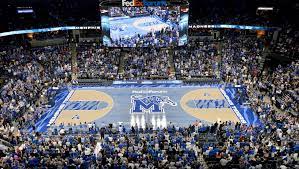 In the world of College Basketball, there are iconic voices we all know the second we hear them. When the Memphis Tigers {18-9,12-5 AAC} and #14 Houston Cougars {26-4, 15-2 AAC} tip-off on CBS at 11 am we will hear another pair, in Bill Raftery and Jim Nance, calling the first game of Championship Week from Memphis. This game has major NCAA Tournament implications for both teams and these rivals will leave it all on the floor for all the nation to see. How did we get to this big-time American Athletic Conference matchup?

The Memphis and Houston basketball programs have been on a collision course to this point since their first game on February 12th. That game, from Houston, ended in a 69-59 win for Memphis over the then #6 ranked Cougars. That win for Memphis has fueled their current run back into NCAA Tournament contention for the first time since the 2013-2014 season. In that game Memphis forward Landers Nolley led the Tigers with 20 points while Freshman Jalen Duran pulled down 11 rebounds en route to the victory.

Memphis comes into this high-profile game red hot winning their last eight games out of nine and looks to keep this momentum going. For the Tigers to win at home they need the following things to happen. Tiger nation to be loud and raucous for the entire game! This is the biggest game of the season for their Tigers. They need the cohesiveness and maturity to continue as we have seen in this winning stretch. Penny and his staff need to continue to communicate and coach as one unit to remain successful.

Tiger fans have been asking the same question for four seasons and that is “When will the Tigers go dancing?”. We will get a portion of that answer when this game is over. With a win, the Tigers would secure a #2 seed in the AAC Tournament next week in Ft Worth, Texas. This seed would give the Tigers a bye in a tournament they have never won since entering the league in 2013. Memphis currently sits at a number 9 or 10 seed in the projections depending on which one you read. For Memphis fans, it is refreshing to see our name there. It is more refreshing to have the entire nation hear two legendary voices call the biggest game of not only this season but during this Penny coaching era.